If your bathroom has the sink and toilet in one room, and you flush with the lid open you could be depositing bacteria such as E.Coli on your toothbrush

There are more than 10 million bacteria on your toothbrush (according to a recent study at the University of Manchester) and this means there are considerably more bacteria on a toothbrush than an average toilet seat.

Every time you flush the toilet, an aerosol spray of tainted water is released with droplets able to land as far away as 10 feet.

It is likely your toothbrush will have been exposed to a high proportion of pathogenic contaminants such as E.coli and staphylococcal.

How to protect vapour shield against environmental contamination

Safeguard a toothbrush with an easy to use protective ‘pod’. These protective pods surrounds the head and shields it from both airborne and cross contamination.

So make sure to flush with the lid down, and wash your hands after you use the restroom and before you brush to avoid transferring fecal matter to your toothbrush. 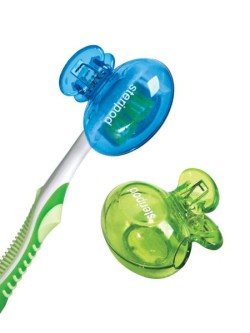